Zombie Fish and why I love Shun: Shameless Self-Promo ahead 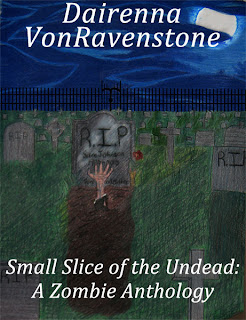 Yes, you DID read that right: zombie fish. The anthology is out, you can find it here at Smashwords.com or here on the website.

Furthermore, since you're here and reading the blog I have a special treat. Straight from the fourth short story ("In the Water") in "Small Slice of the Undead: A Zombie Anthology" is a preview...of the famed zombie fish of course:

I know I was cursing and talking to myself, but I can't remember what I was saying. I know I turned towards my tanks and what I saw made me shut up and stare.

My fish were all looking my way. Normally I wouldn't be so freaked out because fish tend to look at you when you come towards them, especially Siamese Fighting Fish. Vibrations through the floor and thus through the water in their tanks give them a good enough guess that you're making your way over with either food or to talk. Usually I get one or two looking over, then the others join in. I never get looks from the non-Siamese fish since they're not as attentive or something.

I approached the tanks wearily and stood in front of them. The banging at my door was still happening but I didn't care since I knew it would hold for a good while. I slid to the left and all the fish followed in unison. I moved quickly to the right and they copied.

"What the hell?" I asked myself.

Before I could second guess my thoughts, I pulled the lid up on the miscellaneous tank. I don't think I could have ever prepared myself for the next few minutes. All 20 fish in the tank leaped out of the water and attacked me with their little mouths puckering up and grabbing at the exposed skin of my arms and neck.

"THE FUCK?" I shouted as I flailed and began whipping and bashing fish off me.

They were like leeches and no matter how hard I squished or how much I floundered about they clung to me. I finally had enough and began ripping them off by their tails. Once every fish was nothing but an oozing mess on the floor I gasped in a few deep breaths and examined the wounds.

Twenty chunks of flesh were missing and blood was trickling down my arms and neck....

There is one other fun character you'll meet twice in the Zombie Anthology: Shun. Actually there are quite a few fun characters. I enjoyed writing "Bomb" because of a Gothic Kid who calls himself Voltaire. "Itch" has Amber who happens to be Victim Zero, meaning the first person to become a zombie. Of course, "In the Water" has aforementioned zombie fish and "Daddy's Home" has Sam.

Anyway, back to Shun. He appears in the final two stories, "Recording" as well as "Video Feed" and I love him. It might have something to do with the fact he's Asian and I have a certain weakness for Asian men. Or it might be the fact that he uses a samurai sword as a weapon and I am morbidly obsessed with swords and other pointy objects. Or it could be that he's the most intelligent of the bunch and really, who doesn't like a smart man?

If you've been following me on Twitter, you will know that Shun is in fact homosexual. I tweeted a conversation between him and Jess on Saturday night where Shun admits to being homosexual with a lot more words then needed:
Shun: "I am a free thinker and my parents did not tolerate free thinking,"
Jess: "Free-thinking?"
Shun: "I prefer men to women...sexually,"
Jess (or Derrick): "Ah..."

There is nothing wrong with being homosexual, I want to make that perfectly clear. I'm open-minded when it comes to things like that. I think the main reason I like Shun is because he's homosexual. For his family, that's a major sin and even after being disowned by everyone he knew back home, he managed to make a few new friends and a good living for himself. He struggled through adversity, moved to a new country, got accepted into a prestigious university, made new friends and bought himself a house.

Then of course zombies happened and it didn't matter what he did or didn't do. He's just one of those characters that really sticks out in my mind. Kind of like La Puce or Anguish from the "Tale of the Twins" trilogy (Book 1 is out now), or Daimin VanHelgrove from another trilogy I'm working on for far in the future. Of course there's the lovely bunch in "Face Snatcher" which will hopefully be out within the next year or so. Yes, I have a lot on my mind. Or my mind has a lot for me to do. Whichever.

Either way, you should check out "Small Slice of the Undead: A Zombie Anthology". Why? Because it has zombies. More specifically, there are zombie fish. There's also a homosexual Asian man. The Government also admits to creating zombies. Oh and there's aliens. Well, mention of "aliens". Also, it would benefit your own survival if zombies ever attacked. I mean you would know what to do if a bomb went off, or you got really itchy, or green goo appeared in your water, or you woke up dead, or you saw people generally eating each other in a really horrible way.

Plus zombies are cool. They have the whole undead-brainless-will-eat-you thing going on. Actually there's brainy zombies in the anthology. Yes, THINKING zombies. Who would have thought? Anyway, do it for the zombie fish. Do it for Amber, Shun, La Puce and Anguish (who you won't meet if I can't get a good editor ;) ). Do it for the love of all characters and the enjoyment of all living-dead things.

Do it for Daimin VanHelgrove because he's an evil manipulative bastard and if you don't, he'll come after you....once he's done fighting the forces of evil. Yes. Evil fighting evil. Trust me, Daimin's evil incarnate. Pure badassery. As in gets pleasure out of torturing people badassery. Destroying entire planets on a whim. Collects an army of dead (more zombies) to do his bidding. Yeah. Oh and he can't be killed easily. So you get to see him maimed and as he heals, he laughs manically about the attempt as he murders the maimer in the slowest most painful way possible. Now do you see why he's my favorite?

So do it because you want to meet more of my characters. Go on, get the anthology. Get Book 1. It'll make me happy. And when I'm happy, I write more. When I write more, you get to read more. See, it's a win/win situation all around.

Now, don't be so disappointed. I warned you about the shameless self-promoting in the title. And if you are disappointed, buy the anthology anyway. It'll make you happy. Plus it's cheap and you're only losing to try a new author. Expand your horizons before I become exceptionally popular (insert your laugh here, go on, I'll understand) and have to jack up my prices.